Module 3:  Spiritual Development
- a picture of our development over
the ages and a deeper understanding of Sacramental Consultation

Review of Africa Seminary Module 3: Spiritual Development
- a picture of our development over the ages and a deeper understanding of Sacramental Consultation

by Michaël Merle
by Jan Lampen
​
The third module of the Africa seminary considered Rudolf Steiner’s book Knowledge of the Higher Worlds as a path of spiritual development.  Rev. Reingard Knausenberger and Michael Merle again facilitated this seminar. 18 students participated.  This is a brief summary of the module.

The Great Flood, or the Deluge, as reported in most ancient cultures, ushered in a new age of human development.  The oldest recorded writings of this period can be found in the Vedic liturgy, written in Sanskrit.

They revered a pantheon of gods and practiced the activation of the seven major chakras or energy centers in the human body as a process for spiritual development. The chakras are often represented as spinning wheels or lotus flowers at specific points along the spine of the human body. It is indeed a picture of the etheric body. In this module we looked at the seven chakras in more detail.

In the Eastern World, YOGA (union) is the practice of activating these chakras in order to reconnect with the spiritual world. This journey is imagined as energy in the form of two intertwining serpents (Kundalini) rising up from the base chakra to the head. The idea of serpents as transformative and healing agents or guardians of treasure is a biblical image and appears for example in Moses’s staff and the intertwining serpents on the staff of Hermes. In days of old, serpents were regarded as the messengers of the gods.

Buddha was the first person on earth to activate all these chakras and attained enlightenment or nirvana. It is a universal and spiritual law that once a person has achieved a new step in human development, it is easier for others to follow.

According to Rudolf Steiner this is an old picture of human consciousness development and can be understood as a precursor or pointer to the major turning point in world history, which ushered in a new path of spiritual development. This occurred with the incarnation of Christ in the human body of Jesus almost 2000 years ago.

In the Gospel of Matthew (3:7) John the Baptist refers to the Pharisees, the Law-keepers and Guardians of tradition - as Vipers, not because they are evil, but because they represent the old “serpent” way of spiritual development. Instead John points to Christ and names the new symbol that will replace the old: The Lamb.

Rudolf Steiner shows that the new modern path of spiritual development is not an up and out-of-body-experience, but the opposite. It is a downward movement, bringing the spiritual powers from the crown into the three upper chakras: head, throat and heart. It is our task to develop a new aspect of the chakras in this way, and thereby new spiritual faculties. He summarized this path as follows:
“Our head is lifted to the heights of knowledge only when our heart is guided to the depth of reverence.” 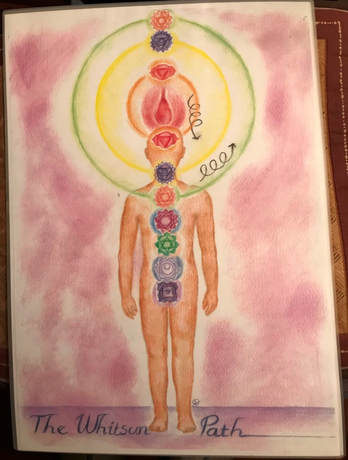 by Michaël Merle
We looked at the 7 preconditions before embarking on a quest for knowledge of Higher Worlds. The 7 Subsidiary Exercises were studied and practiced. These form the basis for a healthy spiritual organisation upon which the higher faculties of spiritual imagination, inspiration and intuition can unfold without harming the individual.

We noticed how some elements of The Act of Consecration of Man take on a new meaning from this perspective of concrete spiritual development and how the Sacrament of Consultation, as a sacrament without prescribed ritual and method, gives the possibility for the individual to express itself freely and create the context in which the Self can be unlocked.

In the Sacrament of Consultation only two people are present - the one who thinks for him/herself and the priest who actively listens. It offers a protected space to ask questions of oneself, to explore the own striving and learning and resolves. It is a place to ‘stand before the Lord’, knowing that wholesome spiritual development unfolds in relationships, first and foremost in relationship with Christ as our Guide. It is a place to bring sorrow, concern and gratitude, knowing that one will be seen and heard. Walking the path of life in inner dignity is in itself already an initiation developing spiritual capacity and it is often a very lonely path. This Sacrament blesses and confirms each unique path.
(edited by Reingard Knausenberger)

​​The Value of the Africa Seminary

I remember Reingard travelling to different parts of the country over several years to meet with a diverse group of youths wanting to explore various questions. I remember hearing then the first whispers of an Africa Seminary, and now those threads are being woven together in what is a full – albeit infant – expression of a Seminary impulse taking root in Southern Africa.

A while ago I moved to Knysna where life slowed to a gentle roll. It’s peaceful here, and easier, and every day I’m newly surprised at the prettiness of my still novel surroundings; my short drive to work winds through a soft mist lining the valley on my right, and past the glossy loveliness of the lagoon on my left. I feel too lucky and although it’s hard to leave, I was also extremely fortunate to be able to attend Module 3 of the Africa Seminary in Johannesburg.

More and more I am baffled by illusion and misdirection I observe. Money seems to stand behind just about everything; profit is the measure of success, agency, freedom; those who step outside popular thinking are vilified and labelled dangerous; science is hammered home as the only truth, and truth itself is harder and harder to recognise. Everywhere there is a sense of humiliation, of not belonging, of being neither seen nor heard, and of unmet need. Perhaps it’s clear that a new way of meeting the world is needed, but I for one, wouldn’t know where to start were it not for Steiner’s teachings and The Christian Community. The future, it seems, asks for qualities built on a groundwork of a new wisdom and a new morality, surely? So, my experience of the Africa Seminary is that we are offered an insight, a map and tools - and the most gracious of guides - with which to start shaping those qualities. As the content of the Seminary continues to unfold in me, I notice the reverence and the humility with which it was all offered – for the human being, for the spiritual worlds, for the need of humanity. I returned to lovely Knysna with a new vision and a new strength, feeling even luckier than when I left.
Copyright © 2012 to 2020. | All rights reserved.