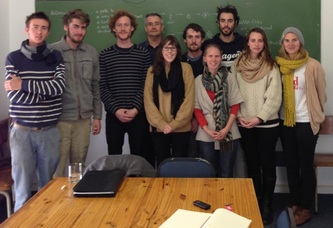 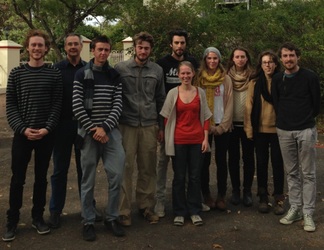 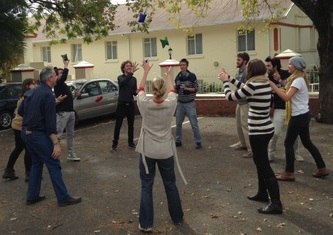 by Dominic Corbett
​
I had the fortunate opportunity of attending a seminar organised by Reingard on behalf of The Christian Community to study Rudolf Steiner and his ideas. The group consisted of eight students, mostly from Rhodes university, and Johnny and myself who are on a gap year from the UK. The seminar was lead by Michael Merle, a teacher at the Durban Waldorf School who facilitated the course brilliantly.

The group was mixed with some having no background in a Anthroposophy and others like me who have been to a Steiner School and been involved in The Christian Community. However, despite my Steiner upbringing I lacked a basic understanding of Anthroposophy. This seemed to be a common question living among the group, as well as how to make a vocation your occupation. These two themes formed the basis for the first public lecture of the seminar.

Over the next two days we, as a group, covered a huge amount of ground becoming more comfortable and familiar with the often hard to comprehend concepts in Anthroposophy. As the seminar progressed more and more questions arose and what struck me was the willingness within the group to engage very deeply and maturely with the content.

I was also very impressed with Michael's ability to work with whatever questions or thoughts the group had and I felt that Michael was able to draw on many years of life experience thus being able to give very insightful answers which got to the very root of our questions.

For me this seminar completely changed my attitude towards life and affected the way I see the world. From what I gather the rest of the group found this seminar very important and useful in dealing with life's challenges.

Many thanks to Reingard, Michael Merle, Sam Mirkin and Jason Higgins for helping to organise and bring this seminar about.
by Gemma Garman

Before Michael Merle conducted the public talk for the weekend long seminar an initial discussion took place between those of us attending the seminar. It was at this point that I started to feel out of my depth a bit as the other members of our group quite obviously had a better understanding of who Rudolf Steiner was and what his thoughts and theories were, as well as a better understanding of Anthroposophy. This was the fourth in a series of seminars which dealt with a similar subject matter, all of which had been attended to some degree by the other members of the group. Questions were being asked like, “How does one lead an effective life?” “What is it in us that leads us down certain paths?” “Are we born with something in us that determines the life we choose?” Coming from an atheist background and never really being entirely convinced by any religion or spiritual school of thought that I had come across, I had given little consideration to questions like this. As soon as the public talk started I was immediately put at ease, however, and found myself feeling far more comfortable with the subject matter at hand. Michael began the talk by giving a description of who Rudolf Steiner was, where Steiner came from and how he began to lecture on the way in which he perceived the world and the way in which we as human beings could go about living in the world.

This lead into a description of what Anthroposophy was. It wasn’t defined for us, as throughout the weekend we were to come to our own understanding of what it was, but we were given a broad description of what Anthroposophy looks at. Certain aspects really stood out for me here: an encouragement to see the world, from my perspective, differently, an encouragement to discover the ideas and theories put forth before us for ourselves and to question and investigate these notions, the practical application engrained in every single idea put forth by Rudolf Steiner and in Anthroposophy, as well as the emphasis on “humanising” our existence and finding a human expression and consciousness. Michael reminded us throughout the talk that we determine how we live our lives and that Steiner at no point claimed to have the ultimate answers or facts, but rather encouraged each individual to question him and to interrogate his ideas. This in itself was so appealing to me, as throughout my upbringing I have been confronted by many people telling me what I should believe and what the ultimate truth is. A person who encourages us to discover meaning for ourselves has a far better understanding of how human beings negotiate the world and how through this we can begin to express ourselves effectively.

The practical application of his ideas came to light when Michael began to give us a description of how Steiner had been approached by various practitioners (farmers, teachers, doctors and religious leaders) and how along with them he developed an understanding of how these fields could best serve the people they came into contact with. This for me was vital in understanding what Steiner was trying to get across as many people within the group had gone to Waldorf schools and could give a personal account of their experiences with his teachings. A discussion took place in which the members of the group began to talk about the practical application of his ideas, specifically the practical application of his ideas in the schooling system. As someone who was new to all of this seeing how other members of the group, as well as Michael, perceived Steiner’s ideas and how they had begun to practically apply these to their own lives, gave me a far better understanding once more of these ideas and the effect that they’ve had.

This public talk set the base from which we were to work from for the rest of the weekend. It covered Rudolf Steiner’s life and how he came to perceive the world in the way that he did and the effect that we can see his ideas have had. There were many notions that came to light that we were then encouraged to question for the rest of the seminar. This talk helped in my understanding of the basic ideas that Steiner and Anthroposophy covered. It also encouraged me to take part in the conversation surrounding these ideas, as talking these through as a group we were all to come to our own understanding of the way in which we perceived these ideas and develop our own opinions.
Copyright © 2012 to 2020. | All rights reserved.