Module 2:  The infancy narratives
of Matthew in terms of the Zarathustrian Picture — and
alongside a comparison with Luke’s Gospel

The Infancy Narratives in the Gospels 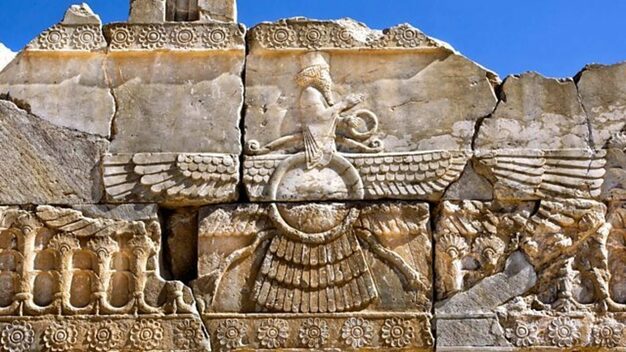 Ancient symbol of the Zarathustra Religion from Ancient Persia
by Ponego Mosige
​
In a brief introduction about the infancy narratives in the Gospels of St. Matthew and St. Luke, we were made aware that every life story has its unique beginning and ending.  Our focus here is on the life of Jesus Christ. The synoptic gospels tell us stories about Jesus. And each gospel has its own viewpoint. The Gospel of St. John talks about cosmic birth, in which he takes us back to the divine evolution of the world. In the Gospel of St. Mark we hear about the cosmic Christ being ‘born’ into the body of Jesus in the baptism in the Jordan. In St. Matthew we are given a birth story with the descending ancestral line of Jesus. The line, which is descending from father to son, beginning from Abraham, regarded as the fathers of faith, which then becomes the line of royalty through King David who stems from King Solomon. We have thus moved from the line of faith to the line of royalty.

In the Gospel of St. Luke we come across a different picture which begins with an ascending line of fathers, but takes us backwards from Joseph to Nathan, who was a prophet. The ancestral line continues to take us back as far as Adam, who was the first human to be created, who stems from God. This Gospel of St. Luke has a strong connection to the 8-fold path of Buddhism.

These genealogies include Prophets, Priests and Kings, which are regarded as the anointed ones. Jesus Christ was called the anointed one, because he was born out the line of the anointed ones. St. Matthew speaks about the Three Magi, (referred to as the wise men). These wise men are considered to be from the Zarathustrian stream, believed to have originated from Persia, and are sometimes called the parses. The ancient Zarathustra of about 5000 B.C. practised a religion connected to Ahura Mazda, the Lord of Light in the sun. A mighty angel of darkness is also referred to as Ahriman, whose wish is that human beings be cut off from the Lord of Light. Zarathustrian religion has the practice of Good Thoughts, Good Words, Good Deeds. These can be felt to be reflected in the three gifts the Magi bring to the Christ child as fruits of human endeavour.

We then investigated the two different narratives of the Jesus children and how they become one through the event of the 12-year-old Jesus in the temple. Even the two families merge to become one family. Much long-planned and guided wisdom in the generations of humans was needed to create the possibility of Christ to walk as a human being on earth and fulfil the task of the cross and resurrection.

Most of the information about Jesus was kept from us for a long time, but some painters have been able to unlock these mysteries for all to see and study, painters like Raphael and Grunewald and Leonardo da Vinci.
​
Above all, this Module, as the previous module, was to me an eye-opener. I have begun to carefully read through the gospels with more conscious understanding. I am still left with a question about the three Magi. Tradition says that they came from Europe, Asia and Africa. The Magus who came from Africa was the youngest. I began to ask myself if this is why African people were regarded as spiritually undergrown.
Copyright © 2012 to 2022. | All rights reserved.